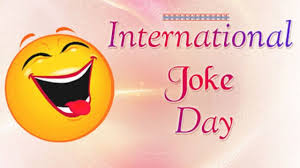 Do you think you’re funny? The best way to get a feel for a country is to try to understand the humor. Laughter is a universally recognized expression of amusement, and joke-telling can become a professional gig for those that truly have a humorous touch.

Joke Day is the perfect day to let out all of the guffaw producing, or groan-inducing jokes you’ve collected over the years, sharing them with friends or any passerby you can get to listen to you.

Joke Day is not just a day for you to prove to everyone how funny you are. It is the perfect day for you to share laughs and to put a smile on people’s faces, including your own. Whether you prefer to share jokes or you like to listen to them, this is a day that is all about smiling, laughing, and having fun, and who wouldn’t want to be a part of a day like this?

They say that laughter is the best medicine, and a lot of people would agree with this! After all, there are actually a lot of health benefits that are associated with laughing. Laughter draws people together in a manner that triggers healthy emotional and physical changes in the body.

Laughter can help to protect you from the damaging impact of stress, diminish pain, boost mood, and strengthen your immune system. Nothing workers more dependably or quicker to bring your body and mind back into balance than a good old laugh.

Humor keeps you alert, focused, and grounded, as well as connecting you to others, inspiring hope, and lightening your burden. It also helps you to forgive sooner and release anger too.

You may have also heard that laughter is a good way to burn calories, and this is true too! Of course, this does not mean that you should replace going to the gym with laying on the sofa and watching your favorite comedian.

However, one study concluded that you can brun around 40 calories if you laugh for between 10 and 15 minutes each day. Over the year, this could be enough to lose around four pounds!

Joke Day seems to have officially begun in the United States but whatever the origins of Joke Day, it is clear that jokes themselves pre-date by hundreds and hundreds of years. The first joke is often attributed to the Greeks, specifically Palamedes, who is also credited with the invention of many other things. An example of an ancient Greek joke-telling reads thus:

“A barber, a bald man and an absent-minded professor take a journey together. They have to camp overnight, and so decide to take turns watching the luggage. When it’s the barber’s turn, he gets bored, so amuses himself by shaving the head of the professor. When the professor is woken up for his shift, he feels his head, and says “How stupid is that barber? He’s woken up the bald man instead of me.”

Greece also boasts the first comedy club, though its purpose was sharing jokes among friends rather than stand up performances as we have now. Jokes have likely been told since man first looked at himself in a pool of water and passed judgment on his own complexion, so it’s a safe bet that people have been celebrating jokes for a long time.

How to celebrate Joke Day

There are many options for celebrating! You could simply tell some jokes to a co-worker or friend, or a stranger on the street, whoever seems to need the most hilarity in their day. Or invite your friends over for a joke-telling party! Take turns telling jokes or reading them out of a joke book or online source.

Another option is to visit a local comedy club and listen to a professional (or wannabe pro) tell jokes for a night of fun! Find out if the club has open mic opportunities and consider sharing some jokes of your own.

If going out for a night on the town doesn’t suit your fancy you could pull up some DVD’s of a famous comedian’s standup routine, such as Robin Williams or Jim Carrey or a TV channel may play an hour-long standup comedy special featuring well-known comedians such as Daniel Tosh.