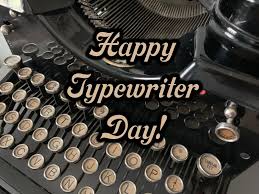 There’s a sound we all know, even if we don’t quite recall it. It’s the mechanical clatter of a typewriter in action. It is reminiscent in the soulless tapping of keys on modern keyboards and recalled in the sounds of the elite of the keyboard world, the mechanical keyboard. But none of them quite reach the splendor and grandeur of a typewriter in action. Typewriter Day celebrates this humble device and the amazing pieces of literature it’s brought to us over the decades.

Typewriters were originally conceived of in 1575 by an Italian printmaker, though it never saw production (and to be fair it wasn’t QUITE a typewriter, but the vestiges were there). In 1714 we have patents in Britain from a Mr. Henry Mill that seems to be a typewriter from the design and was explicitly described as being intended for that purpose. It appears that at some point the device was actually made, though it never went into production and no examples of it exist today.

Another example was designed in 1802 by Agostino Fantoni to help his blind sister writer, while Pietro Conti di Vilavegna invented yet another. But it wasn’t until 1895 that a model went into actual production with the Ford Typewriter. From there the world has never looked back, and typewriters started finding their way into private homes and places of business alike.

Some of the most important classics of the last 100 years have been produced on a typewriter, including the earliest examples of Stephen King’s work, Ernest Hemingway, name a professional writer who wrote a piece of any significance, and odds are high that they were written on a typewriter. Typewriter Day reminds us that while keyboards may be the key to modern literature, the world we live in was conceived on a typewriter.

How To Celebrate Typewriter Day

See if someone you know has a typewriter, or dig your old one out of your closet or attic. Spend some time learning to appreciate the sound of the typewriter and the style of writing it provides. You’ll soon find that the steady clacking of the keys encourages creativity, inspires greatness, and lends a form of satisfaction not found when writing on a modern keyboard. Who knows, this holiday may lead to you writing the next great classic!