May -06 International No Diet Day 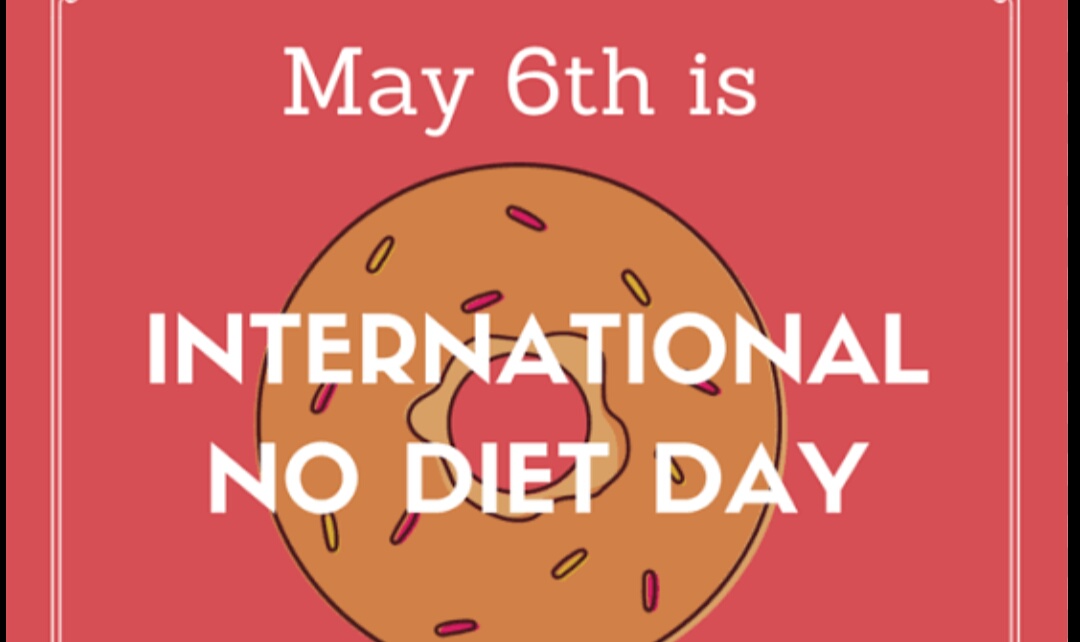 International No Diet Day (INDD) is an annual celebration of body acceptance, including fat acceptance and body shape diversity. This day is also dedicated to promoting a healthy life style with a focus on health at any size and in raising awareness of the potential dangers of dieting and the unlikelihood of success; the Institute of Medicine summarises: “those who complete weight loss programs lose approximately 10 percent of their body weight only to regain two-thirds within a year and almost all of it within five years.” The first International No Diet Day was celebrated in the UK in 1992. Feminist groups in other countries around the globe have started to celebrate International No Diet Day, especially in the United States, Canada, Australia, New Zealand, India, Israel, Denmark, Sweden and Brazil.

Since 1998 both the International Size Acceptance Association (ISAA) and the National Organisation for Women (NOW) have sponsored similar days. ISAA’s day is the International Size Acceptance Day which is celebrated on 24 April. NOW organises a Love Your Body campaign, with its own annual Love Your Body Day in the fall, which critiques what it defines as “fake Images” of the fashion, beauty and diet industries demanding that images of women with diverse body sizes and shapes are used instead.

International No Diet Day is observed on May 6, and its symbol is a light blue ribbon.

Goals of the INDD
In celebrating International No Diet Day, participants aim to:

Question the idea of one “right” body shape.
Raise awareness of weight discrimination, size bias and fat phobia.
Declare a day free from diets and obsessions about body weight.
Present the facts about the diet industry, emphasizing the inefficacy of commercial diets.
Honor the victims of eating disorders and weight-loss surgery.
Help end weight discrimination, sizism and fat phobia.
Criticism
The Institute of Medicine’s Committee To Develop Criteria for Evaluating the Outcomes of Approaches To Prevent and Treat Obesity in its book Weighing the Options: Criteria For Evaluating Weight Management Programs states that “the intractability of obesity” has led to the anti-dieting movement. International No Diet Day is then mentioned and the authors comment:

We agree, of course, that there should be more appreciation and acceptance of diversity in the physical attributes of people, more discouragement of dieting in vain attempts to attain unrealistic physical ideals, and no obsession with weight loss by individuals who are at or near desirable or healthy weights. However, it is inappropriate to argue that obese individuals should simply accept their body weight and not attempt to reduce, particularly if the obesity is increasing their risk for developing other medical problems or diseases.

International No Diet Day was created by Mary Evans Young in 1992. Young is the director of the British group “Diet Breakers”. After personally experiencing anorexia nervosa, she worked to help people appreciate themselves for what they are, and to appreciate the body they have. Young, a British feminist, developed her understanding both through her own experiences of being bullied at school for being fat and by speaking with women who attended the management courses she ran. She relates in her book, Diet Breaking: Having It All Without Having to Diet, how during one of these courses in 1991 she became irritated with the coffee break conversation about whether or not the women were going to eat a biscuit – “Oh, I’ll just have one”, “I shouldn’t really”, “Oh, all right then”. Young asked the group “What do you think would happen if you spent as much time and energy on your careers as you do on diets?”

Two other incidents strengthened Young’s desire to expose what she believes is the futility of dieting. First, a television program in which three women were having their stomachs stapled in an effort to become thin. None of them received any counseling before undergoing surgery and one of the women had split her staples, regained the weight, and undergone the operation again – three times. Mary found this program very distressing, eventually she realised that she identified with the physical and emotional pain of the women in the program because she had herself experienced that deep self-loathing. The second incident, about a month later, was Young reading in a newspaper about a teenager who had hanged herself because she was bullied for being fat. She was size 14 (USA size 12).

In May 1992, Young introduced the first No Diet Day. Originally intended to be a UK-based National No Diet Day, a week before the event, International Clear Your Desk Day was declared and Young was inspired to make her holiday also an international one. It was a small affair to be celebrated by a dozen women with a picnic in Hyde Park, London. Ages ranged from twenty-one to seventy-six and they all wore stickers saying: Ditch That Diet. It rained, and so Mary Evans Young held the picnic in her home.

By 1993, feminists in many more countries were planning on celebrating International No Diet Day. Americans, particularly those in California, Texas, New Mexico and Arizona, were concerned that the date clashed with the Cinco de Mayo celebrations in the southern states. For Young there was no particular significance to 5 May so she agreed to change the date to May 6, coincidentally her birthday.

INDD has evolved into No Diet Day, still on May 6, recommended as a marketing technique for restaurant owners via indulgent treats for their customers. In a similar approach, in a discussion on social marketing techniques for Australian public health educators it was suggested that local campaigns could be tagged onto a national social marketing strategy and the example given was to attach a local Healthy Eating campaign onto ‘National No-Diet Day’.