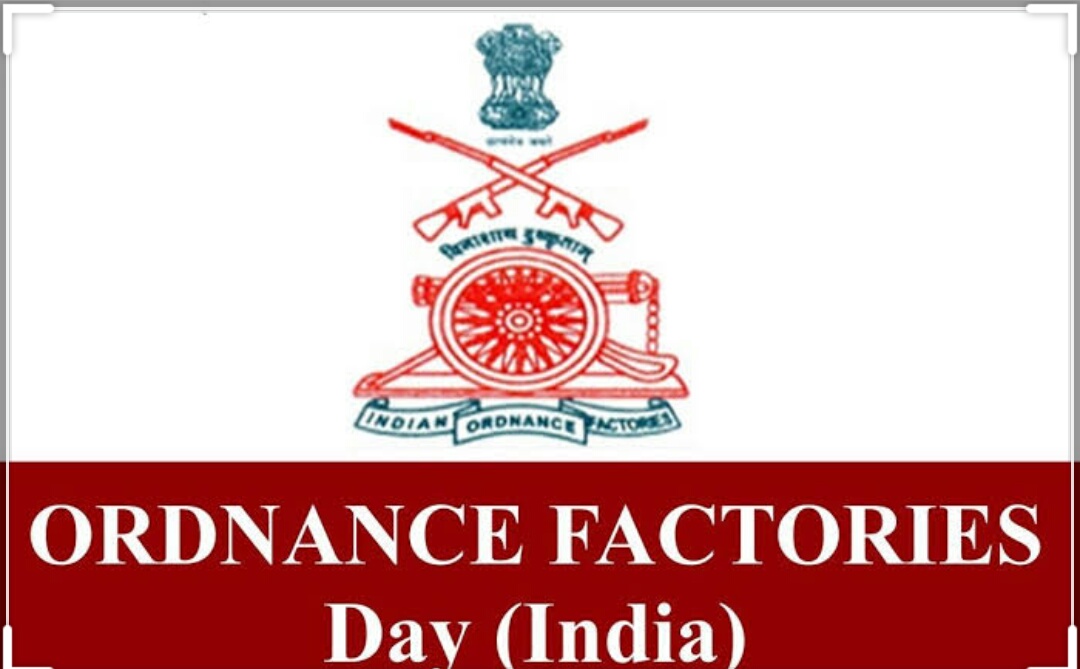 The Ordnance Factories’ Day is observed on 18th of March every year. The production of India’s oldest Ordnance Factory, which is at Cossipore of Kolkata, was started in 18th of March, 1802. The day is celebrated by displaying the rifles, guns, artillery, ammunition..etc in exhibitions all over India. Usually the exhibitions are open to all. The celebrations starts with a parade and the exhibition will also display the photographs of various mountaineering expeditions.

consisting of the Indian Ordnance Factories Bhāratīya āyudh nirmāṇiyān), is an industrial organisation, functioning under the Department of Defence Production of Ministry of Defence, Government of India. It is engaged in research, development, production, testing, marketing and logistics of a comprehensive product range in the areas of air, land and sea systems. OFB comprises forty-one ordnance factories, nine training institutes, three regional marketing centres and four regional controllerates of safety, which are spread all across the country. Every year, 18 March is celebrated as the Ordnance Factory Day in India.

OFB is the world’s largest government-operated production organisation, and the oldest organisation run by the Government of India. It has a total workforce of habout 80,000. It is often called the “Fourth Arm of Defence”, and the “Force Behind the Armed Forces” of India. OFB is the 37th largest defence equipment manufacturer in the world, 2nd largest in Asia, and the largest in India.[citation needed] According to a report by SIPRI, India is the largest producer in the category of ’emerging producers’ in 2017, with four companies ranked in the Top 100. Their combined arms sales of $7.5 billion in 2017 were 6.1 percent higher than in 2016. The two largest Indian arms producers, Indian Ordnance Factories and Hindustan Aeronautics are the highest ranking (37th and 38th respectively) companies in 2017 among countries in the emerging producers’ category. The report also says that the arm sales of OFB have increased by 8.5% in the year of 2017-18. OFB’s arms sales are 96% of its total sales in the year of 2017. Its total sales were at $2 billion (₹13687.22 crores) in the year 2017–’18.

Origins
Ordnance Factory Board predates all the other organisations like the Indian Army and the Indian Railways by over a century. The first Indian ordnance factory can trace its origins back to the year 1712 when the Dutch Ostend Company established a Gun Powder Factory in Ichhapur. In 1787, another gunpowder factory was established at Ichapore; it began production in 1791, and the site was later used as a rifle factory, beginning in 1904. In 1801, Gun Carriage Agency (now known as Gun & Shell Factory, Cossipore) was established at Cossipore, Calcutta, and production began on 18 March 1802. This is the oldest ordnance factory in India still in existence.

The Indian Ordnance Factories have not only supported India through the wars, but played an important role in building India with the advancement of technology and have ushered the Industrial Revolution in India starting with the first modern steel plant of India much before Tata Steel, first modern electric textile mill of India, first chemical industries such as smokeless propellant plants of India, established the first engineering colleges of India as its training schools, played key role in the founding of research and industrial organisations like ISRO, DRDO, BDL, BEL, BEML, SAIL, etc.